"I've Never Been on a Buffalo Hunt"

A woman at an exhibition of Norman Akers’ paintings told him that his work wasn’t Indian enough. “I’ve never been on a buffalo hunt, what do you want?” he remembers replying. His curt response points to the complicated question of what makes something authentically Native, a question that can make us aware of our tendency to stereotype. And that realization can help us get back to looking at the art itself, on its own terms.

The work that is freshest and most exciting is by emerging artists Yatika Starr Fields from Brooklyn and Kade L. Twist from Phoenix, as well as Santa Feans Norman Akers and Emmi Whitehorse. It would be a mistake not to also mention the emerging artist Rose B. Simpson. Without Limits will include new clay sculptures by Simpson; however, her graphic work, recently shown in Snap Crackle Pow! at 516 Gallery in Albuquerque, is her most innovative visual work. Chiaroscuro could have taken a chance on her graphic drawings and, in doing so, more bravely supported the exhibition’s theme and title. However, you can see Simpson’s graphic work at the Museum of Indian Arts and Culture in the exhibition Comic Art Indigéne, on view through January 4. Simpson’s honest and moving drawings use the formal structures of tattoo and comic book art to express what it means to be a young person living within Native tradition and American popular culture at the same time. 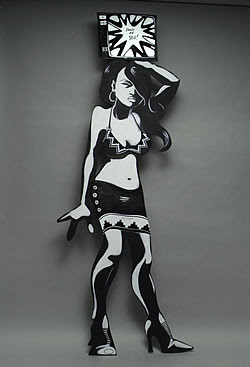 Rose B. Simpson, Objectification Series: Seductive Woman with TV, 2008 , at the Museum of Indian Arts and Cuture


Emmi Whitehorse has spent long hours in vast landscapes, watching the movement of light across the surfaces of land and water. This is what she paints: not an illustration of what a landscape looks like, but the experience of what it feels like to be in and of the landscape over time. Whitehorse works on paper mounted on canvas. She starts by rubbing the paper’s surface with paint, creating a vaporous atmosphere on which shapes appear and disappear. Markings that Whitehorse describes as a “personal alphabet-like cipher or code” also float by, seamlessly linking internal and external space. These are beautiful paintings; comparisons to both ancient petroglyphs and Cy Twombly seem equally relevant.

Norman Akers’ expressionistic paintings represent the intersection of cultures that make up his daily experience. In Rebirth 2000, a tree with severed limbs and roots floats above a vintage car, a floating acorn, and three telephone poles that suggest the crucifixion. Scientific illustrations of turtle fetal development frame the left side of the canvas. Akers’ paint is lush and varied, thick and painterly as well as flat and graphic. The Baroque compositions spin and churn; life is in a constant state of flux. No matter what has been lost, it is clear that new opportunities will be born, and we will be forever between the boundaries of past and present, tradition and hybridity.

Yatika Starr Fields has lived in Brooklyn, working as a bike messenger, for the last four years. He attended the Art Institute of Boston for two years and became enamored of graffiti culture. The energy of street life is in his work. He will exhibit a single large painting in this exhibition, Collision on Central Park South, in which horse heads emerge from a whirlwind of graphic swirls and architectural forms. There are exciting possibilities within this collision of Native culture, graffiti, and European painting tradition. It will be exciting to watch Fields’ ideas develop over the coming years.

Kade L. Twist’s minimalist, conceptual paintings (see image at the top of this article) are the most impressive works in the show, not only because they are visually gorgeous (no reproduction can do them justice), but because Twist’s ideas, about Indigenous art and culture, are subversive and smart. “I wanted the work to resemble candy—specifically Jolly Ranchers. I wanted them be digestible, approachable works,” Twist said during a phone interview.

Are Jolly Ranchers a clever reference to colonialism? Perhaps. Within the shiny, sugary, minimalist surfaces, symbols from the Cherokee syllabary float by in random groupings. Each painting looks as if one is peering into a Petri dish at the cellular structure of a person, made up of a language that is trying to conceal itself. The work is a brilliant commentary on current biogenetic mining and genomic research projects involving Indigenous peoples, as well other forms of “cultural mining”.

Twist studied with Edgar Heap-of-Birds, who pushed him conceptually and intellectually to comment on culture through metaphor. Twist, who is primarily a writer and installation/video artist, won the 2007 Native Writer’s Circle of the America’s First Book Award, and one of his installations is presently on view in Remix: New Modernities in a Post-Indian World at the Smithsonian Institution’s National Museum of the American Indian. Twist is also one of the founders of Postcommodity, the cleverly-named collective of three young, Native artists, who, according to their website, “… create art that builds a culturally relevant bridge for American Indian people between inherited cultural traditions and the dynamic innovations of contemporary global society.” Work that results from this level of intelligent inquiry, by contemporary artists from every cultural background, should be featured more often in Santa Fe.

This review was originally published in the August 15, 2008 issue of the Journal Santa Fe, in the column Object Lessons.
Posted by Kim Russo at 8:53 AM

What a great article -- especially coming from an artist of your stature! I would like to compliment you on your thoughtful writing. It is incredibly refreshing to read an article that raises so many important ideas and issues regarding contemporary Indian art and the Santa Fe market. We desperately need more articles like this. Thank you for writing the article and contributing to the contemporary Indian art scene and the Santa Fe art scene.