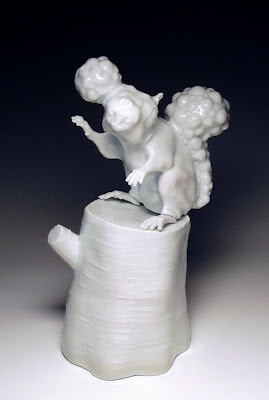 During the early years of the 19th century in Russia, one could buy sweet, delicate porcelain figures depicting drunks and corrupt government officials to place on the fireplace mantel. During the Russian revolution, when ceramic factories were nationalized, one could add pretty farm girls flush with patriotic fever. During the Cold War, one might move some of those figures over to make room for a little national heroism: Polar explorer Ivan Papanin and his crew, perhaps, with their dog, Jolly.

Porcelain didn’t originate in Russia, of course. The material came to Russia through France and Italy by way of Marco Polo, who returned to Italy with a small, white vase from his travels to China in 1292.

Pure white porcelain, called Blanc de Chine, is the name the 19th century French gave to the porcelain they imported from Dehua county, China, where the pieces had been made primarily in the 17th and 18th centuries. The white clay is covered in a white glaze, sometimes with a bluish, brownish, or pinkish tint, but overall the works appear simple and austere. In 18th and 19th century Europe, the passion for porcelain ran parallel with the popularity of exotic items like coffee, tea and chocolate (all which could be stored in porcelain containers). Porcelain quickly symbolized wealth, status, and nobility.

All of this history is central to understanding why the contemporary porcelain figures of Linda Cordell, whose works are included in “Reconfigurine” at Santa Fe Clay through December 13, are so impressive. (Also included in the exhibition are ceramic figures by Lisa Clague and Debra Fritts.)

Cordell creates immaculately sculpted animals in white glazed porcelain. At first glance, before one recognizes unnerving details, the animals look like cliché reproductions of the 19th century figurines that might decorate a blue and white country kitchen: chickens, squirrels, deer. But her work is far from cliché. These are animals ravaged by ecological disaster, riddled with disease and unease. Like the ceramic propaganda manufactured in Russia, Cordell’s ceramics are not just pretty things.

“Mange” is a little dog twisting around to lick itself. At first look it one might assume the dog’s name is likely “Spot”, until one realizes that the spots are mange and the scratching and licking is the result of illness. “Infectious” is another dog on its back, genitals and open, tumor-like sores exposed on its underbelly. A squirrel stands on a tree stump, one arm raised toward the enormous tumor coming out of its right eye in “Tumor”. 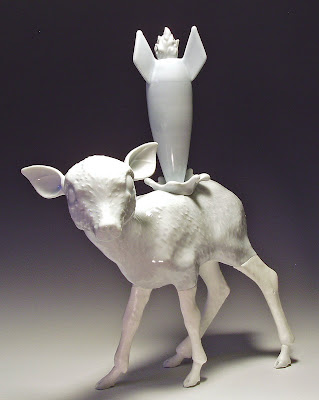 Two works suggest messages that are layered rather than direct. “Rocket Deer” is just that—a deer with a rocket sticking into its back. It is just a matter of time before it explodes and the deer…oh, well...poor deer. The upper portion of a squirrel is mounted to a decorative plaque in “Fight/Flight”. This squirrel dons boxing gloves. He wants to fight back, but he can’t move. He can’t flee. He is firmly taxidermied. Cordell can be funny, but her message is sobering. 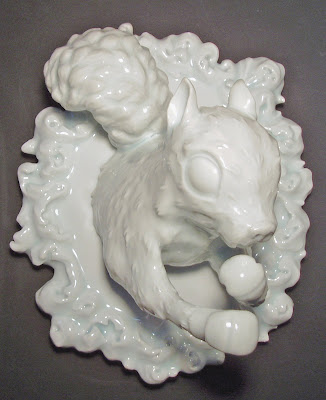 Cordell currently lives and works in Fredonia, New York, near Buffalo. She received her MFA from Louisiana State University and her BFA from Alfred University, which is well known for its ceramics program. This year, Cordell’s works have been included in several additional exhibitions, including “Confrontational Ceramics” at the Westchester Arts Council in Westchester, New York and “A Human Impulse: Figuration from the Diane and Sandy Besser Collection” at the Arizona State University Art Museum in Tempe.

Cordell’s works are painstakingly crafted, but not for the sake of craft alone. It is easy to get involved in glazing and surfacing techniques in ceramics, without any connection to the intended meaning or message of the work. Part of what makes Cordell’s works so extraordinary is that all of her choices—of clay body, glaze, style, scale, color—contribute directly to a clear point of view about animals and the environment. That she is aware of the history of her material, and is using all its references to the advantage of her message, is even more impressive.

White is the color of death and mourning in China, and some historians suggest that traditional Blanc de Chine symbolized loss. Whether or not that is accurate, Cordell’s work is certainly about loss—the loss of environmental balance and the suffering that results. That she crafts her ideas in a material that for centuries has represented gain and wealth only makes the works more ironic and unnerving. In Western terms, white represents purity, and if this is Cordell’s meaning, the irony is even stronger. How pure is our environment right now? Under the surface of manicured lawns and clean, public parks, how is nature actually faring? The fact is that few of us personally witness the erratic swimming of a dolphin lost in a river, or beaches covered with dead fish four deep. Cordell brings those realities to the gallery and the living room in the form of pretty, decorative, passive objects—physical representations of our psychological and emotional relationship with the truth.

This review was originally published in the November 28, 2008 issue of the Journal Santa Fe, in the column Object Lessons.
Posted by Kim Russo at 9:26 PM