Today’s column is the fourth in a four-part series about group exhibitions. These reviews illuminate the qualities that make (or break) a group show and the curatorial decisions that successfully frame multiple perspectives under a singular vision. 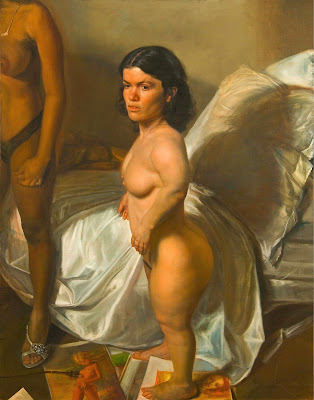 Aware of how difficult it can be to draw a convincing sketch of, say, a sailboat, during a game of Pictionary, many of us are awe-struck by an artist’s ability to create a painting that copies nature so exactly that it’s mistaken for a photograph. It takes years of careful observation and daily practice to master realist techniques. It isn’t easy.

But what does realism provide the viewer beyond the “wow” factor? Skill alone is a cool visual trick. It’s impressive and fun. But skill combined with something else—something emotionally or intellectually convincing—is worth a longer look.

The 15th Annual Realism Invitational at Klaudia Marr Gallery in Santa Fe is an opportunity to compare the works of realist artists from around the world. There is a wide range of realist styles in the show, but the variety is curated well and it is possible to appreciate each work individually.

Some of the artists (Doug Webb, Daryl Poulin, Robert Peterson, and Bill Fogg) make works that demand nothing more from the viewer than admiration for the artist. There is little suggestion of a point of view about the world; there is simply a landscape or a still life or a figure presented with concentrated neutrality. As a conceptual or theoretical position this would be dynamic and interesting. But these artists are concerned with making a living rather than making a point. And that’s why these works are ultimately forgettable.

Gustavo Schmidt attempts to turn his skill into something more, but his trickiness is so silly that it obscures his sincere desire to illuminate the spiritual within the physical. “Ascension Series-Understanding”, is a traditional still life of lemons on a glass shelf in front of a shiny red silk background. Except that a lemon is ascending, literally, like Christ or the Virgin, up the center of the composition. Worse, the artist has painted “speed lines” (as comic artists call them) which indicate to you, dear viewer, that the lemon is moving up. It’s beautifully painted and intellectually embarrassing. 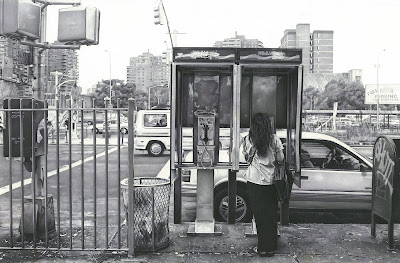 Aristides Ruiz is as technically skillful with watercolor and a ball-point pen as Schmidt is with paint. His urban landscapes and portraits (rendered with the sitter’s eyes closed) are about as photo-realist as it gets, but they reveal an honest humanity that is visceral and moving. The materials and the technique are secondary to the emotional impact of the work. In Ruiz’s work, realism is a means rather than an end.

John Brosio’s work, “Jerk in a Field”, is a poignant human comedy. A man drinks a beer while he passively watches the tornado heading his way. The message (trouble is on the horizon, and we are absurdly partying down) is what sticks in the viewer’s mind. The realistic style of the work keeps the message from being abstract; copying nature is not what the painting is about. In his artist’s statement, Brosio writes, “I tend to think of my work as more allegorical than anything, often calling juxtaposition into play, grabbing for what is "larger than life" and exploring its role in modern American identity. It is this identity which fascinates me, our increasingly constant - maybe even numb -relationship to the overt and extreme which drives the work. And the challenge for me, the fun, is an exploration of how to anchor a choice of visually allegorical elements - often seemingly disparate - into the truly inevitable relationships they actually are.” 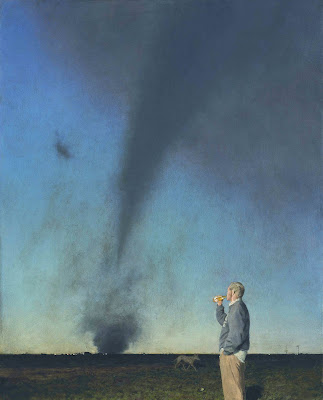 John Brosio "Jerk in a Field"

Margaret Bowland’s large, ambitious paintings are welcome surprises in the show. At first, Bowland’s highly skillful and academic rendering of the figure and her ability to paint just about anything (sky, crows, people, jewelry, balloons) seems to be the point of the work. But then sly commentaries reveal themselves--about gender, power, race, beauty, and contemporary art. In Bowland’s work, the bravado of the artist’s hand is perhaps a slight-of-hand.

Bowland’s impressive rendering makes surreal situations believable and odd juxtapositions acceptable. But there are conflicts. The naked bodies we see in advertising and the movies are mostly female and white; most of Bowland’s are dark-shinned and one is a dwarf. The discomfort comes not from Bowland’s choice of subject but from the viewer’s conventional notions of female beauty, “normalcy”, and race.

A female dwarf, Anna, who is a frequent model for Bowland, stands naked next to a disheveled bed in “Models”. A dark-skinned female, topless in her black underwear, stands on the left, her body cut vertically in half by the left edge of the canvas and her head cut off by the top. She wears a good necklace and bejeweled heels. We are confronted equally with what compels us (signifiers of sex and desire) and what repeals us (“the other”). Bowland’s choice to render her ideas realistically keeps us from intellectually running off into the comfort of abstraction or suggestion. This is it, as it is, and the viewer must deal with it.

Anna stands on art magazines tossed on the floor and open to images of paintings by New York art stars Lisa Yuskavage and John Currin. Yuskavage and Currin are known for their overtly sexualized images of (mainly white) women. But under the feet of the naked dwarf, Yuskavage’s and Currin’s messages seem easy and comfortable. Bowland is being ballsy here, and it’s smart. 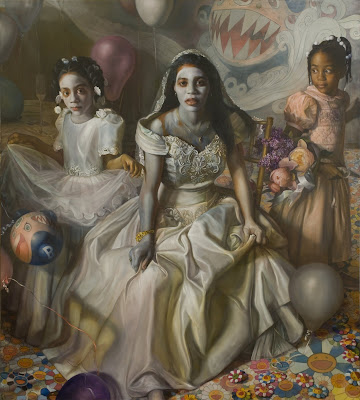 
The messages in “Murikami Wedding” are also complex and intelligent. A dark-skinned woman in white-face, wearing a wedding dress, looks straight out at viewer from the center of the composition. She is flanked on either side by young girls in party dresses, also dark-skinned, one in white-face and the other not. The wallpaper behind them, and the floor beneath them, are spotted by helium balloons and packed with images by the Japanese pop culture artist Takashi Murikami. There are conflicts here as well: between celebration and insolence, us and them, high and low culture, acceptable and unacceptable ideas of beauty. Why aren’t Bowland’s snappy, smart and powerful images in the contemporary art spotlight? They should be.

In her artist’s statement, Bowland writes, “… After watching Anna leave my studio, I have knelt on the floor, stooped even lower, crawled, to see the room as she sees it.” Realist artists who show us what we’ve already seen aren’t giving us much. Realist artists who reframe our experience, who ask us to metaphorically “kneel on the floor or stoop a little lower”, are demanding that we stop idealizing or inventing our experience and instead directly see the truth. In doing so, they ask us to be a little more compassionate, a little wiser, and a lot more real.

This review was originally published in the November 14, 2008 issue of the Journal Santa Fe, in the column Object Lessons.
Posted by Kim Russo at 8:27 PM