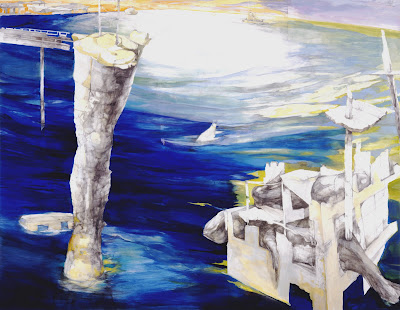 Beginning in the 1940s, contemporary artists confronted sculpture, painting, drawing, printmaking, and photography and laid traditional definitions of these media mostly to rest. EVO gallery’s current exhibition, “Beyond Graphic: Contemporary Drawing and Works on Paper”, presents innovative approaches to contemporary drawing over the last twenty years. Some of these works have been seen in international venues many times and are not as relevant now as they were initially. But next to more recent works, a conversation about the recent history of drawing, and its future possibilities, starts to emerge.

The late conceptual and minimal artist Sol LeWitt challenged the notion that a drawing had to be made by the artist’s hand. He created sets of directions by which someone else would execute the work. His directions often allowed some choice (make lines that are not straight), so that the decisions of others became part of the work. He effectively killed the notion that the artist is more important than the work itself. The LeWitt work at EVO, a fire-engine red square with a circle in its center, has been painted on the upstairs office wall by Gerry Snyder. Visible from the ground floor, the work glows a nearly solid crimson. Walk upstairs, and from an angle, the mat circle contrasts with the gloss square so that the two separate, until, walking in front of it, the two shapes begin to merge again. Close-up, the red will dramatically reflect onto the viewer’s face, making her part of the work as well.

LeWitt’s reductive contribution to the history of art seems dramatic until one confronts Julian Opie’s recent, oval work, “Christine Swimming 02”. It’s easily missed, and that is part of the intent. Slyly installed over the gallery’s informational text at the base of the stairs (where one could interpret it as a hip decoration), Opie’s slick works refer to advertising signage and video games—the places where minimal, abstracted information is used to quickly convey a banal message. We have been subliminally trained to pay attention—for a second or two--when we see flat and coded images such as these, and this work only requires the time it takes to descend the final steps of the staircase.

Santa Feans may be unfamiliar with the work of Los Angeles-based painter Kelly McLane, but her 2002 work, “Fragile” is a great introduction. For over a decade, McLane has been using the direct, intimate line of the pencil with the color and mark of oil paint in large works on canvas. In this particular work, giant whales are stacked on top of each other in a wooden pen of sorts, situated in the ocean. To the left, a mammoth, decapitated human leg stands in the water—perhaps the remains of a statue after an apocalyptic war (as in the final scene of “Planet of the Apes”). McLane’s process of adding and subtracting marks and images on the surface of the canvas has a direct relationship to the loss and gain she conveys in her work. This loss and gain is personal, global and historical—a constant state of flux and flummox. 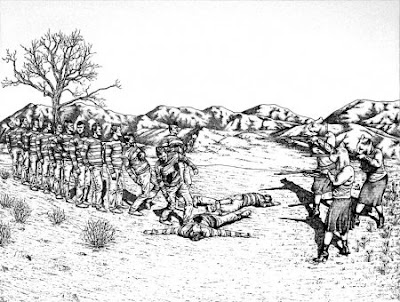 Luke Dorman’s ink drawing on gessoed panel, “Grimalkin Conflict”, is a good work to end with. A figure that looks much like the artist himself, in a horizontally striped shirt, is represented in duplicate. The figures form a check out line of sorts. When one of the figures reaches the front of the line, three cat-headed, skirted women in boots shoot him with rifle-fire, leaving the clones bleeding on the ground. It’s a funny, and not-so funny, re-visioning of Goya's “The Third of May and/or Manet’s “The Execution of Maximilian”. Dorman is trying to figure out where he belongs within the raging, transforming river of art history. Each artist in this exhibition has looked behind, at the traditions and artists and methods of working that came before him, and asked “What else can I add?”

Beyond Graphic: Contemporary Drawing and Works on Paper
Through January 10
EVO Gallery
554 South Guadalupe Street, Santa Fe (in the Railyard District)
505-982-4610
www.evogallery.org
Posted by Kim Russo at 6:40 AM