Contemporary Landscapes of the American West 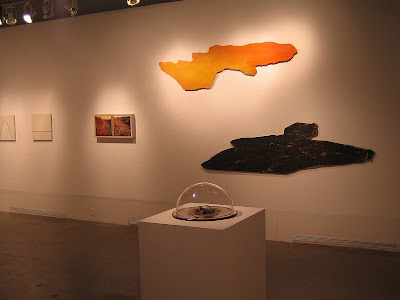 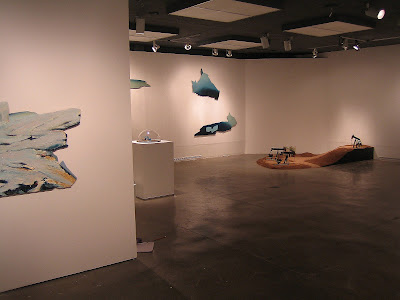 Three artists — David Jones, Patrick Kikut and Edgar Smith — have combined their perceptual and conceptual visions to explore the western landscape in "Artist Point" at the College of Santa Fe Fine Arts Gallery, on view through Oct. 17. According to Kikut, "the title 'Artist Point' designates a landscape as well as signifying the simple action of pointing to a particular place or thing." What, exactly, are these three artists, who teach at the University of Montana and the University of Wyoming, pointing to? 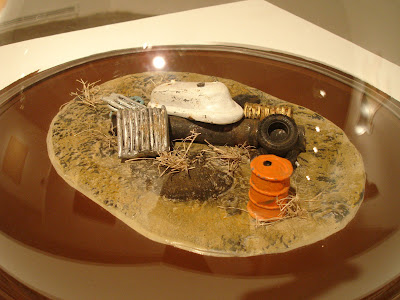 
David Jones' sculptures are small, doll house-like scenes of landscape colonized by humans. In "Fool's Gold," a vitrene covered with a glass dome, Jones shows us an overturned bathtub, a discarded house radiator, a tire, and an orange oil drum surrounded by barren earth and dry grass. Except for the glass dome, the work is made entirely of painted cast iron. The physical weight of the work is an effective metaphor for the "weight" of our actions. Jones shows us the part of the landscape we look past and ignore as we romantically admire the pink and purple sunset.

In another work by Jones, we encounter a to-scale, miniature billboard, just a few feet high off the ground. The attention to detail is impressive: the billboard is complete with painted-out graffiti and a fresh tag in the right-hand corner. The word "nowhere" stretches across the length of the sign. Made of cut-out dots that light up from behind, the word "nowhere" intermittently reads "now here." Jones' works are funny, and the humor is what keeps us present long enough to unconsciously swallow his serious message. In this way, Jones' works are wonderfully effective, sugar-coated pills.

Edgar Smith is a "mad professor" of materials and approaches. Smith's works include a gorgeously painted, realistic landscape diptych, drawings created from staples, wire and paint, and abstract, carved "trophies." While David Jones makes works based on intellectually planned concepts, Smith makes works that articulate what his intuition is sensing about the landscape. Smith is feeling around for clues. The works themselves, rather than Smith, offer the answers.

A visually simple painting, "Plain," is a good example. The minimal, monochromatic, thick layer of creamy paint is smooth at the top and rough at the bottom. The dividing line between smooth and rough is marked by a horizontal stretch of wire attached to the surface with a series of vertical metal staples. This piece, along with its companion, "Mountain," point out just how little visual information humans need in order to make a cognitive connections. A horizontal line is a horizon line. The upper half of an uneven, vertical ellipse is a mountain. These associations occur so quickly and completely that it is difficult to experience either work abstractly.

Smith's trophies, mixed-media wall pieces that include carved chunks of wood, reference animal trophy mounts without the messy carcass. In these works, Smith has "taxidermied" the landscape, and in doing so questions the notion that the American West can be "won" or conquered. Unfortunately, these works look so much like the sculptures of H.C. Westermann, the post-war artist who had great affinities to surrealism and Dada, that Smith is either looking at Westermann regularly or he is channeling him. One of Smith's works, "Melty Mountain (Infirm Peak)" is so much like Westermann's 1968 work "Untitled ('This Great Rock Was Buried Once for a Million Years')" that it is almost an unabashed copy.

Patrick Kikut, whose paintings and drawings are also included in "Artist Point," curated the exhibition. "I think that artists have to live in three worlds," he says during a phone interview. "The external world, or the time and space we live in; the internal world of thoughts and ideas; and the world of art history. I think the show looks at landscape from all three of these worlds: Jones' work is about the external landscape, Smith's work presents ideas about landscape, and I look at landscape from context of art history."

Kikut's shaped paintings on wood hang on many of the gallery's walls, placed high and low, floating ameba-like throughout the space. At first encounter, the works are abstract paintings about shape, mark, paint and the environment of the room itself. Some of the shaped paintings, by their texture and color, reference rocks. Others suggest color-field painting. The juxtaposition is equally intriguing and perplexing.

Kikut bases his works on the paintings of two romantic landscape painters, Thomas Moran and Caspar David Friedrich. Moran, a 19th century painter of the American West, is known for his dramatic paintings of Yellowstone and the Grand Canyon. His works have influenced how all Americans mentally visualize the landscape of their country. Friedrich, a German artist, made equally grand paintings of the German landscape. Unlike Moran's paintings, Friedrich's works were often laden with religious symbolism.

Kikut has successfully extracted the essence of each artist: the rugged, untamed physicality of the land that Moran described in his paintings of the American West, and the vapor-like skies in which Friedrich contemplated human existence. Kikut's Moran-influenced works hang below his Friedrich-inspired ones, and the space in between the two is the literal space of the gallery — the space the viewer inhabits. These works are most successful when Kikut's references and intentions are made known to the viewer.

Overall, "Artist Point" will be a more powerful experience for visitors if the conceptual framework is made known. The addition of a curatorial statement or statements by each of the artists will enrich the experience for viewers who are not fluent in contemporary art practice and theory. Kikut acknowledges "it's important for artists to interpret their work in written form for the viewer. It's hard for the public to keep up with contemporary art, especially in a time when artists are utilizing so many materials and styles, as well as historical and theoretical references."

"Artist Point" includes beautifully crafted works by three artists who thoughtfully consider landscape as physical space, as resource, and as metaphor. It shouldn't be missed.

This review was originally published in the September 26, 2008 issue of the Journal Santa Fe, in the column Object Lessons.