Struck by the Sublime 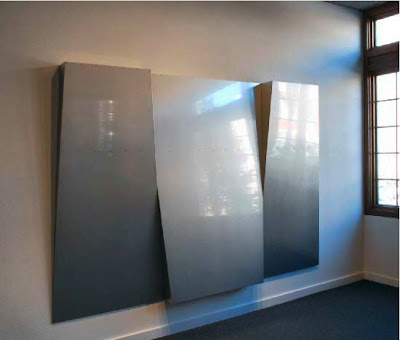 There is no other way to say it: this is a stunning exhibition. Constance DeJong’s works cause the viewer to forget the world and the self—to stop thinking. Utilizing a reductive palette of materials, DeJong has created works that one might dare to call sacred--sacred in that spontaneous, visceral way in which one experiences an object before a thought takes hold.

In her exhibition, “Shift”, on view at Charlotte Jackson Fine Art through October 31, DeJong has reduced terror and beauty, dark and light, the somber and transcendent, into a sublime, aesthetic awe. It would be simple, and incorrect, to say that this is formalist or minimalist work. It isn’t.

Although DeJong’s works are made of metal, they are visually soft. “Big Black Work With Three Tilting Planes #2” is composed of three vertical, tilting, and converging rectangles hanging a foot off the ground on the white gallery wall. The entire work is human scale-six feet tall by 100 inches wide. The edges of each rectangle, shaped like a wedge, reveal the glowing orange of the bare copper. The front faces of each are black: a dense, subterranean black that absorbs light. This work is a sculpture and a painting--a painting of time and movement, stillness and infinity. Without knowing DeJong’s process, it is evident that this surface was carefully crafted and meticulously felt. A reproduction of this work will not communicate much, especially on newsprint. Like Mark Rothko’s paintings, DeJong’s works demand intimacy with the viewer. A snapshot will not do; you must show up and have a conversation with the work, in person, in real time. 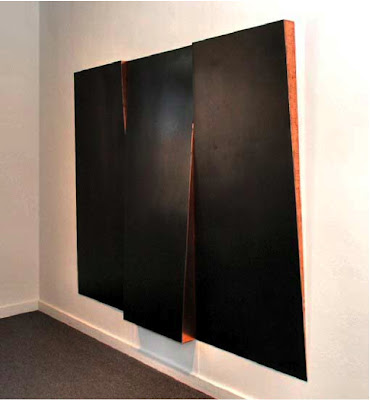 Most of the works in the exhibition adhere to the same
organizational structure: three angled rectangles hanging side-by-side. The number three has many cultural and symbolic meanings that seem to resonate with the work: the divisions of time (past, present, future), the human abilities of thought, word and deed, the Christian trinity, the three aspects of the Egyptian sun god (rising, midday, setting), and even the three grammatical forms of self: me, myself and I.

"I work with numerical logic, in some cases with classic mathematical ratios like the Golden Mean, to generate or guide form in very precise ways,” says DeJong during a phone interview. “Within this rigorous framework, the surfaces are meant to express the nature of elemental processes like gravity, the movement of water etc. I work on the copper pieces outside, pouring the patina solution in layers, sometimes over the course of a month or more until a surface is realized. I don’t intervene but I do make decisions about which naturally produced surface is expressing the right quality. Then I seal it.”

Like DeJong, Rothko worked in watery layers, rubbing thin paint into the canvas. According to art historian Dore Ashton, "his surfaces were velvety as poems of the night." DeJong’s copper works suggest something similarly elegiac. They refer to what is constantly apparent or looming in oneself, the core that lacks a name or solid form.

“Untitled Stainless” is a work that is nearly identical in size and form to “Big Black Work”, but its presence is dramatically different. This work is made of unmilled steel that DeJong mentioned is difficult to find. This is steel in its pure state, before it is manufactured into a utilitarian object. The surface, which DeJong carefully chose but did not alter, is highly reflective and creamy. The water-like surface is intersected by a row of screws. They refer to the construction of the work and to its existence as an object. Without the screws, the transcendent power of the surface, light, and scale would be uninterrupted.

The exhibition includes very small works, made of steel, aluminum and silver that pull the viewer into an internal and sensual world. Their intimacy is as powerful as the larger works.

In addition—and this shouldn’t be missed—another installation of DeJong’s works has been installed at Charlotte Jackson’s project space just off Airport Road. A to-scale cardboard model of a large rectangle is propped against the wall next to rectangles in materials with which DeJong is experimenting. Upstairs, small paintings made of stained copper plates hang in plastic bags on the wall. A visit to the project space will reveal DeJong’s quiet and careful working process and deepen the viewer’s experience with the work. 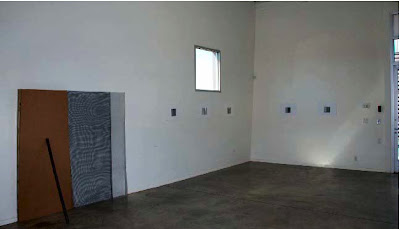 
Edmund Burke, who published the “Philosophical Enquiry into the Origin of our Ideas of the Sublime and Beautiful” in 1757, believed that terror or pain, along with beauty, is key to experiencing the sublime. According to Burke, a feeling of the sublime is only possible during a fully absorbed sense of astonishment, “in which all…motions are suspended, with some degree of horror. In this case the mind is so entirely filled with its object, that it cannot entertain any other."

Burke’s sublime is experienced when we witness (and are struck silent by) natural disasters, oil spills, and forest fires. These days, Burke’s sublime is all around us. It is this particular quality of the sublime that is present in DeJong’s works. They are not beautiful in a “pretty” sense. Their beauty is sourced from those things that are somber and detached. This is not a negative sense of detachment, but rather the fact of how things really are—a Zen-like acceptance of the true nature of life. All of it, from the pleasurable to the horrific, is life, and life is wonder.


This review was originally published in the October 17, 2008 issue of the Journal Santa Fe, in the column Object Lessons.
Posted by Kim Russo at 8:01 PM