Playing in the Shadows 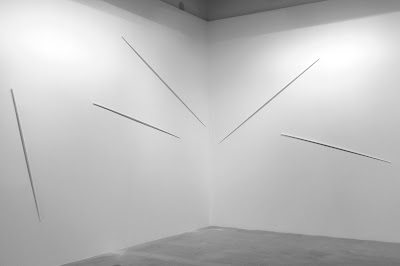 
One of the pioneers of abstraction, the Russian-born Kazimir Malevich, coined the term Suprematism in 1915 to describe a type of artistic practice that rejected narrative, social or political content in art and instead championed works of pure form with spiritual qualities. Along with Piet Mondrian, he is often cited as a forefather of 1960s and '70s Minimalism.

In his 1918 painting “Suprematist Composition: White on White,” Malevich tried to eliminate all superfluous elements, including color. This landmark work was followed by a series of plaster sculptures he called “architectons,” forms which were simultaneously models of imaginary buildings and three-dimensional realizations of Suprematism's main tenants. Walking through George Thiewes' installation of new works, “Penumbra in White,” on view through Oct. 25 at EVO Gallery, Malevich's architectons come immediately to mind.

When one is standing just outside the gallery's front door and peering inside, Thiewes' works appear to be singular large, gray lines drawn across the gallery's white walls. When one walks into the space, the drawings transform into sculptures: long, thin slats of white painted steel protruding from the walls, casting deep shadows. The shadows are louder and more dynamic than the objects themselves. From a distance, these sculptures seem to be undulations in the walls, seams perhaps.

The slices of light and shadow in Thiewes' work are perceptually similar to the geometric shapes of shadow and light in Malevich's architectons. From a distance, both Thiewes' and Malevich's sculptures appear to be flat, geometric patterns — up close they are three-dimensional forms. Both artists are exploring the nature of human perception and the illusionistic natures of light and space.

Thiewes was a successful glass artist in the 1960s and 1970s, and changed his medium and approach to art-making in the 1980s. Like Malevich, he designed theater sets. It is clear that his work in glass and in theater provided much information about light and space, and about perceptual awareness and illusion. His sculptures were first exhibited in a solo exhibition at the Phoenix Art Museum in 2006. He lives and works in Tempe.

Even though there is a long sliver of an object protruding slightly from the wall, the real substance of Thiewes' work comes from the space literally cut into the wall next to the steel slat. This cut-out space is objectless. On close inspection, one can see that the shadow is created by this cut-out space, which, like the shadow, also has no solid form. In Thiewes' work, the Suprematist notion of pure form and nonobjective art moves away from the object (almost) altogether. 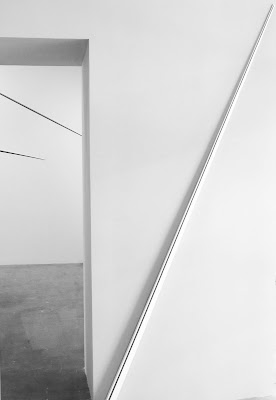 
The title of the exhibition, “Penumbra in White,” refers to the sliver of light between the shadow and the full illumination of a lit object, such as the moon. “Penumbra at 1:35,” a singular, diagonal piece on a narrow slip of gallery wall, can be easily missed, despite the fact that its slit protrudes from, rather than burrows into, the wall. “Tumble,” a series of five diagonal works installed in a corner, can be interpreted as a single line plummeting through space.

Both of these works bring to mind Maya Lin's Vietnam Veteran's Memorial, which is made of two long black granite walls that meet in a wide V. The walls of the memorial are sunk 10 feet into the ground at the intersection and only 8 inches at each end. Lin's memorial has often been called a “visual scar” because it is both a literal scar in the earth and a symbol of the emotional scars caused by war. Thiewes' works are similarly disorienting white scars in the gallery walls, and they bring to mind both natural and man-made cuts in the earth's surface. The exhibition might suggest the snow-covered land severed by deep, straight rivers, or the sun-drenched desert cut by ravines. But the real relationship with the earth is found in the changing light caused by the earth's rotation, which shifts according to the time of day and the time of year. The change in the earth's position affects the color and the contrast of the sculptures' shadows.

This is a quiet show. The work requires the viewer to slow down, to become aware of the subtle qualities of human perception, and the physical relationship between the viewer's body and the installation itself. As easy as it might be to spend only a few minutes in gallery, stick around. The longer the visit, the greater the experience.

This review was originally published in the October 10, 2008 issue of the Journal Santa Fe, in the column Object Lessons.